“There were moments when I wanted to quit but [the Martha’s Table team] cheered me on and encouraged me to keep going. They would check on me regularly. It shows that you’re working with a company that cares for you. They wouldn’t invest in their staff if they didn’t care. They want us to go further and will provide the resources necessary.” –Erica Cameron, Lead Teacher. 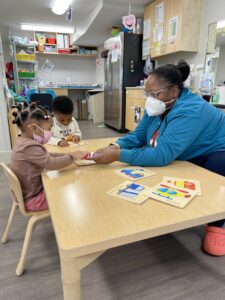 Teachers at Martha’s Table play a critical role in the success of our mission. Through them, our commitment to supporting stronger children can be felt in every classroom. Every educator comes to Martha’s Table with a unique journey, and all are collectively fueled by the same passion: to help young learners grow and thrive. For Martha’s Table’s Lead Teacher at the Maycroft, Erica Cameron, this passion became apparent when she was a teenager.

“It was my destiny to work with children.” –Erica Cameron, Lead Teacher

For as long as Erica can remember, she has always helped care for children. At 7 years old, she used to help take care of her baby brother. When she got a little older, she helped take care of the young children at the church on Sundays. During high school, Erica took a child development course and immediately fell in love. She knew this was the career track for her and pursued a bachelor’s degree in early education.

After working as an educator in Prince George’s County for many years, Erica was ready for a new challenge that would enable her to pursue her passion for teaching while also expanding her professional skills and knowledge. A friend of Erica’s thought she’d be a good match for Martha’s Table and encouraged her to apply. To this day, Erica remembers the positive experience she had interviewing with Martha’s Table and specifically how MT leadership was willing to work with her on areas for growth – another organization wasn’t willing to invest time in growing and disqualified her for.

From the beginning, it was clear to Erica that Martha’s Table was committed to investing in its people and the community. Erica has been a lead teacher with MT for the last two years, during which time she has taught two groups of young learners and earned a Master’s degree using Martha’s Table’s Staff Training and Education Program (STEP).

The benefits of Martha’s Table’s STEP program include…

Admittedly, Erica would not have considered going back to school had the STEP program not existed. She knew she wanted to go back to school after receiving her bachelor’s but the cost associated with higher education put that desire on hold until she landed at Martha’s Table.  She completed her Master’s in Early Childhood Education Leadership from the University of Arizona Global Campus and was supported by her supervisor and team who encouraged her along the way.

“There were moments when I wanted to quit but [the Martha’s Table team] cheered me on and encouraged me to keep going. They would check on me regularly. It shows that you’re working with a company that cares for you. They wouldn’t invest in their staff if they didn’t care. They want us to go further and will provide the resources necessary.” –Erica Cameron, Lead Teacher.

The STEP program is one of many benefits that Martha’s Table team members have access to. Martha’s Table is committed to building a culture that focuses on our team’s development and well-being. We believe that a valued and nurtured team has the biggest, most positive impact on its community.

If you’re interested in learning more about employment opportunities at Martha’s Table or want to apply for any of our current positions, click here.

We’re All In: Investing In Family Supports

Martha’s Table is dedicated to providing parents and caregivers with the support and tools they need to thrive in their roles. Our Family Engagement umbrella of programming provides the critical link for families to thrive together.

Building Strong Financial Foundations, One Family at a Time

“[Direct cash assistance] not only helped my family financially but also helped reduce my stress and allowed my family to go back to a mommy and children mode that was rooted in re-connection.” Angel Hawkins, Ward 8 resident and THRIVE recipient

We’re in it for the long haul… So families can THRIVE!

“I felt as though Ra’Chelle tried her best to come through with any resources or outlets that she could,” Mr. Morrison remembered. “I couldn’t thank her enough.  I feel as though she’s really trying to extend her hand to make sure I get the best  resources and help that I can get.”