Still have a question or two?

Please use this form!

Investing in the Future of Young Learners

Sewn into the Fabric of Our Community

The Quilt Corner is a collective of people with interest in learning how to quilt and expand the impact of quilting within the community at large through a deeper understanding of the Quilt Codes of the Underground Railroad. With multiple cohorts throughout the year, members meet every Thursday to learn about the patterns & techniques, history, and impact of quilting as the group creates a community quilt together. The Quilt Corner is led by Charlene Hursey and self-taught quilter Dr. Blanche Brownley, who started her quilting journey by watching how-to videos on Facebook and reading quilting books.

We’re All In: Investing In Family Supports

Martha’s Table is dedicated to providing parents and caregivers with the support and tools they need to thrive in their roles. Our Family Engagement umbrella of programming provides the critical link for families to thrive together.

We’re making a bold financial investment in our community with Child Savings Accounts! 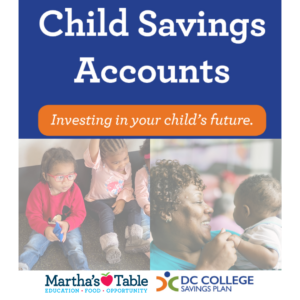 Learn more about our Child Savings Accounts initiative! Investing in the future of young learners.